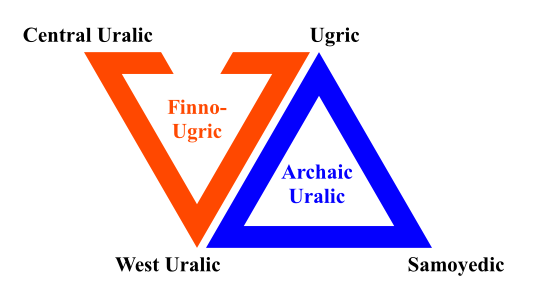 In the first draft of the first academic paper on Helleno-Uralic theory, I discuss sub-Uralic interrelations via quantitative affinity and kinship. This post provides key points of that study.

There are numerous models of Uralic phylogeny, such as the traditional model, Jaakko Häkkinen‘s model, and Asko Parpola‘s model (p. 169; based on Häkkinen).

There is still not a consensus about the interrelations of the Uralic branches. I do not strictly adhere to one phylogenetic model. However, I propose two sub-Uralic lexicosemantic areal groupings:

The two triadic groupings – Finno-Ugric and Archaic Uralic – represent quantitative affinity: the overall number of Uralic proto-terms shared between any two or more groupings, per the Uralic Etymological Database (UEDB). When the co-representation of kinship terms is factored in, the Finno-Ugric triad is interrupted between Central Uralic and Ugric; while the Archaic Uralic triad is uninterrupted, due to the requirement of all three included branches’ lexical participation in the reconstruction of kinship.

Finno-Ugric as a grouping has existed since the 19th century CE. Support for Finno-Ugric in my study is influenced by my reliance upon data from the 20th century. As I explain in my paper, this study will need to be redone upon the release of a new Uralic etymological dictionary for the 21st century.

Archaic Uralic is my own proposal, which is essentially formulated from the perspective of the Samoyedic branch. Traditionally, Samoyedic has been viewed as the first branch of Uralic to diverge, leaving behind Finno-Ugric. In Häkkinen’s model, Samoyedic is instead grouped with Ugric as “Ugro-Samoyedic” or “East Uralic”.

The Finngreek model groups Samoyedic as having been originally equidistant from both West Uralic (Finnic + Mordvinic + Samic) and Ugric. Meanwhile, Samoyedic shares the least affinity with Central Uralic (Mari + Permic). both quantitatively and familially.

Archaic Uralic is named thus due to its proposed attestation of the Helleno-Uralic root arkʰ- ‘beginning; to begin’, whence indirectly English “archaic”. In Helleno-Uralic theory, Archaic Uralic represents a geolinguistic bond between Samoyedic and West Uralic, perhaps through which loans could have been exchanged with Archaic Greek.

Ultimately, the Finngreek model represents a continuum of disintegrating Uralic during the early 1st millennium BCE. West Uralic is the most interconnected group; and may have been the primary group in contact with Hellenic – although it is considered that Central Uralic and Ugric were not far from the area(s) of contact, as would be evidenced in the growing number of Helleno-Mari proposals (eg: HMa. ákrā ‘hill’, árdalos ‘dirty’, ásāmos ‘nonsensical’, glyk- ‘sweet’, mũtʰos ‘word’, oukí ‘no’, sarkáz- ‘to smile’, etc.), and terms reconstructed to Finno-Ugric (eg: HFU ama- ‘to shovel’, leúe- ‘to stone’, noītā ‘seer’, skápʰ- ‘small boat’, etc.). In regards to Helleno-Samoyedic potential, significant research will be undertaken to identify isolated terms, as Helleno-Uralic theory currently only represents Samoyedic in U < H proposals which can be reconstructed to a “Uralic” stage (eg: HU (z)dugātā́ ‘crossbar’, log- ‘to calculate’, ourā́ ‘squirrel < tail’, pʰus- ‘to blow’, etc.). The potential role of Samoyedic (via Archaic Uralic) in Helleno-Uralic exchange is therefore unclear until further notice.